Start a Wiki
watch 01:23
'Krypton' Profile: Adam Strange
Do you like this video?

The Word of Rao

Adam Strange is a main character of Krypton portrayed by Shaun Sipos.

Adam Strange is a D-list superhero from Detroit, Earth whose only superpower is his Zeta-Beam, a device that allows him to teleport across light years. He might have named it himself, but he did technically steal it from the alien planet Rann.[1] Adam Strange finds himself stranded on Krypton as the unlikely mentor to Seg-El. Adam will stop at nothing to ensure that the greatest hero who ever lived actually exists.

Adam traveled 200 years back in time to find Superman’s grandfather Seg-El to give him a message ”That someone from the future is coming to destroy Krypton and that he needs to find the fortress” he also gives him a Sunstone. But when he returns to see if Seg found the Fortress of Solitude he learns that it got Seg’s parents killed. And a grieving Seg is not willing to believe Adam when he tells him he needs to save his grandson from the collector of worlds or Brainiac. He does get a lift to Kandor from Seg and in the Tavern he meets Seg’s friend Kem. Once Seg returns from the Guild with a tablet they are unable to find what Adam is looking for at first Seg had enough and walks away. But when Adam tells Kem to take an other look at the tablet and he found an meteor shower in the Outlands. And as Adam swears to Kem that he is telling the truth, they set out to the Outlands and end up finding Brainiac’s probe. After they find what they were looking for they take it back to Seg-El’s Apartment in The Rankless District to show it to Seg and he finally believes Adams story, but it also shows that Brainiac is not on his way but that he is already there. Now after they took the Probe to the Fortress of Solitude, to be studied and scanned by Val-El. By scanning it they find out that the probe is a shell for a Sentry and as it is parasitic and will look for a host, so they will have to find it before it infects a host. So Adam go’s to look for it on the black market in The Rankless District and he even get’s lucky and finds it, but as he is unable to pay for it he ends up stealing it and hiding in Kem's Tavern behind Kem his bar. And then he shows Kem and Seg the Sentry and as Seg and Adam head to the Fortress of Solitude they get trapped in the Sagitari’s “Rankless Initiative” and as they are scanning faces Seg realises that Adam needs to get out of there and make his way to the Fortress with the Sentry. When Adam is at the Fortress he and Val are scanning an he asks him if he can take a look at his Zeta-Beam as it doesn’t seem to work anymore, but they are interrupted by an alarming sound of Val’s scanner. It turns out the Sentry was dormant because it had already found a host. 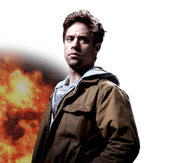 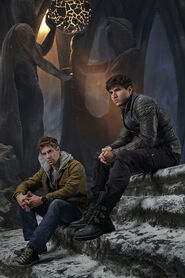 Retrieved from "https://krypton-series.fandom.com/wiki/Adam_Strange?oldid=2872"
Community content is available under CC-BY-SA unless otherwise noted.