Start a Wiki
watch 01:35
'Krypton' Profile: Brainiac
Do you like this video?

Brainiac is a main character of Krypton portrayed by Blake Ritson.[1] [2]

Brainiac, known by the Kryptonians as the "Collector of Worlds", travels back in time in order to avert the birth of Superman, his arch-enemy in the present, and thus give himself free reign over the universe. 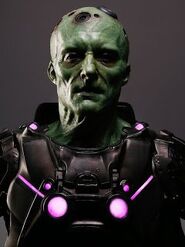 Retrieved from "https://krypton-series.fandom.com/wiki/Brainiac?oldid=3052"
Community content is available under CC-BY-SA unless otherwise noted.