Charys-El is a supporting character of Krypton portrayed by Paula Malcomson.[2] [3]

Charys-El is the matriarch of House El. Charys helps her son Seg navigate the treacherous pitfalls of Kandor City, their Kryptonian home embattled with oppression and revolt.

Before The Voice of Rao took power, Charys was a Military Guild pilot who had plans to explore space. But after the family was de-ranked and they moved to the Rankless District she stayed at home. But after Seg's encounter with Adam Strange she decides to tell Seg the truth and take him to the Fortress of Solitude. Seg and his mom aren't in the Fortress long before Sagitari descend on it, having tracked the vehicle Seg's mom stole and parked nearby. She's hidden Seg in a secret compartment, and sacrifices herself so that he can continue the journey. Charys is arrested an tried for treason. The council is not satisfied with her testimony: the biotracker in the ship picked up two life forms. She says she was alone in it. Seg's father (falsely) confesses that he was the other life form in the ship, draws a firearm, and is in turn fatally blasted. Charys attempts to avenge her husband's death by shooting the executioner, but is also laid low by Jayna-Zod. She and Charys knew each other, and all about their children's liason dangereuse. She promised Charyss a painless death, free of torture. 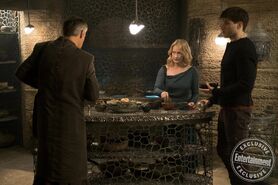 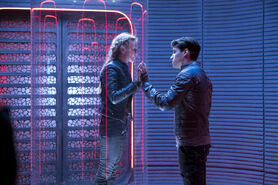 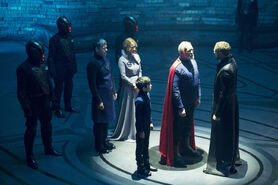 Krypton: First Look
Add a photo to this gallery

Retrieved from "https://krypton-series.fandom.com/wiki/Charys-El?oldid=2172"
Community content is available under CC-BY-SA unless otherwise noted.