Start a Wiki
watch 01:34
'Krypton' Profile: Daron-Vex
Do you like this video?

Daron married into House Vex twenty years ago and continued to rise through the ranks of Kandorian society. He believes he is the only man with the vision and strength to lead Kandor.

Daron-Vex married into the House Vex and has fives daughters, one of them being Nyssa-Vex. Rising through the ranks of Kandorian society, Daron-Vex became the Magistrate of Kandor City and a member of the Lawmakers Guild. In this capacity, he oversaw Val-El's trial for sedition and sentenced him to death when the scientist would not pledge allegiance to the Voice of Rao. His pronouncement also led to the House El being deranked from Kryptonian society.[1]

Fourteen years later, Daron-Vex still served as Magistrate of Kandor. When a terrorist attempted to kill him during a trial, he was ironically saved by Val-El's grandson, Seg-El, who was there simply to deliver medicine to his father, Ter-El. As a reward for his actions, Daron-Vex arranged for Seg to be reinstated to a Ranked status, to marry his daughter, Nyssa, and take the Vex surname. Daron later oversaw the trial of Seg's mother, Charys-El, who had stolen a skimmer and then claimed to be a member of Black Zero in order to get her voice heard before the Council. During the trial, both Charys and Ter were killed by Jayna-Zod. Daron subsequently scolded Jayna for her actions, before realizing they were being overseen by the Voice of Rao.[1]

Daron later called Seg to the Lawmakers Guild. Noticing Seg's interest in the Voice of Rao's mask, he explained it being a callback to their old gods, as well as their one true god Rao. He also checked that Seg wasn't intending on repeating what his parents had done, before letting him know of his investiture ceremony into the House Vex. Daron was later visited by Seg, the former discussing the latter's grandfather's fall from grace. After Seg requested he join the Science Guild, Daron approved it. Hoping to keep Seg's trust through his daughter Nyssa, he had her give Seg his parent's ashes, an otherwise treasonous act. Shortly following, Daron and Nyssa found Seg in the Lawmakers Guild, early for his investiture ceremony. Seg decided not to become a Vex, though still continue his work through the Science Guild. The Voice of Rao appeared, approving this, much to Daron's frustration.[2]

After the failed attempt to kill the Voice of Rao, Daron started to serve Brainiac in the fear of losing his life. He however has no problem killing his Daughter Nyssa as he is the one to come to her chambers to exicute her for treason. But she is her fathers daughter and trics him with a hollogram. Later Seg also showes up and tells Daron that Brainiac whill rip Kandor from the ground. Before he can be forced in helping Seg and Nyssa escape from the Guild two Sagitari walk in and give him te opertunity to get out of there. Next we see him leading the closing ceremony for the Nova Cycle celebration in the rankless district, but he is cut of by the early appearance of the Voice of Rao.[4]. Leader of Black Zero and former colleague of Daron-Vex Jax-Ur busies herself by torturing Daron, but he ultimately escapes. He finds his way to Kandor, buys a skinner ship, and flies it away; but his career is cut short when Jax-Ur activates the same device she was torturing him with, and brings him down from afar. Nyssa leaves Cor-Vex with Mama Zed and Jax-Ur while she confronts her father – now a workhorse – to learn about her real past. But before her dad can say anything, he gets his head blown off by Lyta. 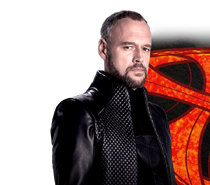 Character photo
Add a photo to this gallery

Retrieved from "https://krypton-series.fandom.com/wiki/Daron-Vex?oldid=2818"
Community content is available under CC-BY-SA unless otherwise noted.