Start a Wiki
watch 01:29
'Krypton' Profile: Nyssa-Vex
Do you like this video?

Nyssa-Vex is a main character of Krypton portrayed by Wallis Day.

The youngest daughter of House Vex and a brilliant lawmaker, Nyssa-Vex understands the city's politics and is utterly at home within the establishment of Kandor's ruling class. She's adept in the art of political alliance, but it is Seg who will teach her about friendship. Despite her outward appearance of beauty and refinement, Nyssa is highly skilled in self-defense and weaponry.

Nyssa is an ambitious, fearless, manipulative, highly intelligent and cunning woman. Since she was a child, Nyssa's only fear was failure and she is ready to do whatever it takes to achieve what she sets out to do and is not afraid to go to extreme lengths. Nyssa's manipulative side was shown when in an attempt to gain Seg-El's trust, she gave him his parent's ashes.[1]

Nyssa is also shown to be very quick-witted. She figured out the secret affair between Seg-El and Lyta-Zod. Moreover, Nyssa has shown to be completely devoted to Kandor, as shown in her and her father's plan to overthrow the Voice of Rao and re-establish a golden age and unite Kandor.[2] Nevertheless, Nyssa has displayed a soft side when Seg came to her to help Lyta, accused of treason and accepted Lyta's case as her advocate. Even though Nyssa as an accomplished lawmaker, could not do anything to set Lyta free as the evidences were made up at the demand of the Voice of Rao, she tried her best to give Lyta-Zod a way out by talking to her father and Jayna-Zod.

She considers herself as a manipulative instrument that her father molded in his own image and betrayed everything she stood for to get her father's love. Though Nyssa is very strong and brave, she does possess a sense of unworthiness within herself. Stubborn and very determined, she is willing to betray anything that means something to her, even herself, to achieve her goals.

Nyssa-Vex is the daughter of Daron-Vex, working alongside him in the Lawmakers Guild.

Prior to the series

In Transformation, Nyssa mentioned to Seg-El that she had a relationship with a female combat instructor in the Military Guild which ended, due to infidelity on her lovers side.

When Daron-Vex was saved from a terrorist by Seg-El, he rewarded the young man with the chance to be Ranked, join the Science Guild, and bind with Nyssa. Nyssa and Seg visited the Genesis Chamber, where they learned that their child would be called Cor-Vex, he would be best suited to the Lawmakers Guild, and would live 173 cycles. She saw her father's plans as nothing more than a game, knowing that if Seg accepted, Daron-Vex would have succeeded in taming the dreaded House El.[3]

Nyssa has Seg brought to her, taking him to talk to her father about his investiture ceremony. The following day, in an attempt to gain his trust, Nyssa gave Seg his parent's ashes. Later, she walked through the Lawmakers Guild with her father before Seg's ceremony, coming across him. He expressed his displeasure with joining the House Vex, instead choosing to wear the symbol of the Science Guild, an act approved by the Voice of Rao.[1]

Nyssa caught Seg at the Guilds, on his way to talk to Lyta-Zod. She talked to him about his need to lie better if he intented to keep his secrets, secret and learn Seg of Lyta's promotion to commander of the Sagitari. Afterwards, she witness with her father the Voice of Rao anger on the attempt on his life of Black Zero and the threats he threw to her father if the rankless initiative was a failure. Later on, Nyssa informs her father on the fiasco of the initiative with only one arrest, Kol-Da's. One of Lyta's squad sagitari.

The Word of Rao

While dressing up for the day, Nyssa is interrupted by Seg-El who came to ask for help. After Lyta-Zod arrest, Seg came to Nyssa to ask if she could help save Lyta's life, knowing that the House Vex is preeminent in the Lawmakers Guild. Nyssa, knowingly why Seg desperately wanted to save Lyta's life, urged him to reveal his feelings towards Lyta. When Seg admitted his secret affair with Lyta, Nyssa accepted to do everything she could to save her.

Thereafter, Nyssa went to see Lyta in her detention cell and told her she was her advocate. Lyta, at first wary of Nyssa because of her father and her link with Seg, did not want anything to do with her. However, Nyssa explained to Lyta that she was her best chance to get out of this trial unscathed, saying that if she did not trust her, she had to trust Seg as he was the one who came to her for help which convinced Lyta and they start to work together.

Later that day, Nyssa realizing that her father, Daron-Vex, falsified evidence against Lyta, went to ask him why he chose Lyta-Zod as scapegoat. She reminded him that their plan to overthrown the Voice of Rao was based on the control of the sagitari which would only happen by gaining Primus, Jayna-Zod's trust. She tries to plead for the liberation of Lyta, stating that she is not afraid of the Voice of Rao but her father is adamant; the Voice of Rao needs a high ranked military responsible for the rankless initiative fiasco to appease the rankless.

Realizing that she is hitting a wall with her father, Nyssa decides to go behind her father's back and talk to Jayna-Zod. She offers Jayna an alternative: her loyalty to their plan to overthrown the Voice of Rao against Lyta's life. Jayna is more than reticent, knowing that the House Vex and more specifically Daron-Vex are not trustworthy and that agreeing to that deal would dishonor the House Zod which is known to be the most honorable in Krypton since it began. Nyssa give her time to think about the worth of that honor if it means she has to sacrifice her only child for it.

Quotes (Nyssa Vex to Seg El) "My father only thinks that he was the one who chose you." 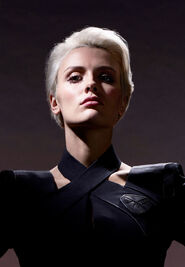 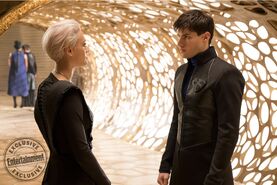 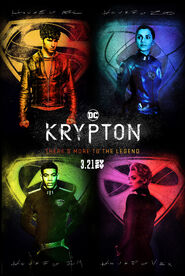 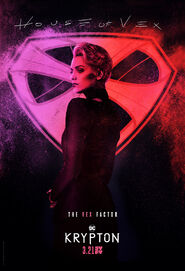 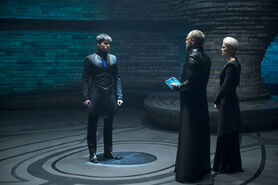 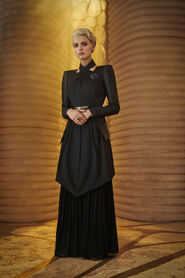 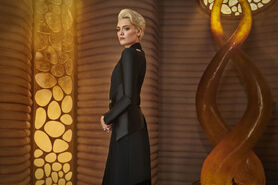 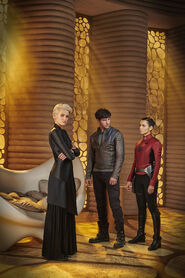 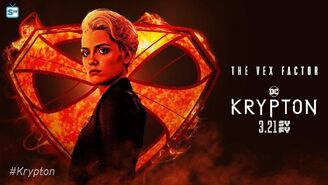 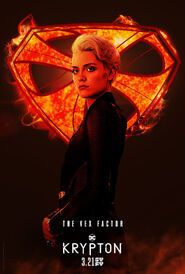 World on afire Gallery
Add a photo to this gallery

Retrieved from "https://krypton-series.fandom.com/wiki/Nyssa-Vex?oldid=3109"
Community content is available under CC-BY-SA unless otherwise noted.